I just got back from my third SharePoint Conference. I attended the first one in 2007, when it was an invitation-only event for Microsoft partners, and only had several thousand people in attendance. This year’s conference was said to have over 10,000 registrants.​ I’m amazed and encouraged by how much adoption and enthusiasm for SharePoint remains, even 5 years after SharePoint revolutionized the way web sites were built and function. I was able to work with Microsoft Learning to do an “exam cram” session to help folks prepare for exam 70-573: SharePoint Application Development. I also worked with MSL to help people know how to register for the exams and understand the new generation of Microsoft certifications.

Somehow, I also managed to squeeze in the time to take both of the beta SP2013 infrastructure exams. The format of the new exams is far more interesting the interactive than the old multiple choice exams. The new generation of exams require you to drag and drop server topologies onto a map, complete sentences with the right phrases, and place instructions in the proper sequence. On Tuesday night, Jon Bon Jovi performed in the beach area in the courtyard of the Mandalay Bay. I managed to walk outside just as he was singing, “Wanted, Dead or Alive”. After that I felt like I had sufficiently seen Bon Jovi and left for the night to get some much needed sleep. (I was staying at the NYNY hotel which was 1.2 miles away from the conference center, so I was pretty worn out from all the walking by the end of the week!) 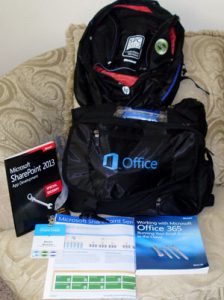 I walked away from the conference with some free nice gifts. I got the conference backpack, but then I also won a laptop messenger bag with the new Office logo, which I will be proudly sporting. (It’s nice to get a replacement for the messenger bag i got back in 2007 with the old logo.) I also won an excerpt from a new book by Ted Pattison and Scot Hillier from the Critical Path booth, and I picked up a copy of Microsoft Press’s Working with Office 365 from the Microsoft Learning people.

It was a great conference and a great opportunity to see a lot of old friends, whether customers, vendors, or other MVPs and colleagues. Now that I’m back home, I’m ready to hit the ground running with SharePoint 2013. Are you with me?