is year was my fourth year in a row to attend the MVP Summit in Redmond, at the Microsoft Campus. It’s always nice to catch up with my colleagues from all over the world. Since this summit followed closely on the heels of the SharePoint Conference in November, it’s understandable that I didn’t get to see as many other SharePoint MVPs there as usual, but it’s always nice nonetheless to get a chance to meet with individuals from the product team.

Each year, Microsoft throws a big shindig for all the MVPs from all the product groups. I usually skip it because, well, the novelty of attending an event at a baseball or football field isn’t that thrilling to me. This year, though, I thought I’d avoid being a party-pooper and decided to at least go once to see what it was all about. We had the event at Century Link Field, the home of the Seattle Seahawks (although since the NFL season was over, the field was outfitted as a soccer field for the local MLS team, the Seattle Sounders.) We had ample delicious food and drinks, and the highlight of the evening was when they shot off fireworks for us. (Since I’m pregnant, I decided to pass on the zipline they had set up for attendees to ride!) I had fun hanging out with friends like Corey Roth, Wes Preston, Cathy Dew (first year MVP, yeah!), and Jennifer Mason, as well as my MVP regional lead, Melissa. I wasn’t able to convince Corey to sing Desperado in the karaoke room, though. Maybe next year. Meanwhile, my husband and 22 month old daughter seemed to be having fun on their own, having pizza night at the mall back in St. Louis. I guess they survived just fine without me! 🙂 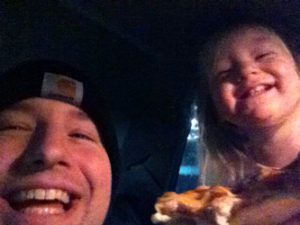