Rob Bogue is a SharePoint MVP who is well-known for one of the only published books out there written for SharePoint end-users (as opposed to the myriad of books written for developers or IT folks), called The SharePoint Shepherd’s Guide for End Users. (This book can actually be licensed in a digital edition as well, for use in corporate environments.) The SharePoint Shepherd’s Guide takes users through the step-by-step actions they need to take to perform particular tasks such as uploading a document to a library or adding a colleague to a My Site. It’s written in a reference manual way, so users can quickly look up the kind of task they want to execute and learn how to do it, rather than feeling like they need to sit down and read the book cover-to-cover before they can use a SharePoint site. Most of the tasks include numerous screen shots to guide users through the process.

Rob recently came out with a new DVD series that dovetails on his book. It’s called The Psychology of SharePoint Adoption and Engagement. Although it’s important to explain to someone how to carry out a task (whether that’s showing an end-user how to check in a document or helping a programmer know how to use the SharePoint object model), when it comes to SharePoint, there’s something much bigger at stake, and that’s ensuring that the SharePoint site that’s being built is going to be used, period, by users. 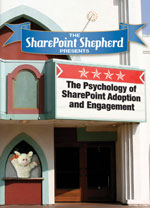 I’ve often said that SharePoint sites need “more carrot, less stick” (as Christian Buckley so nicely summed up) in terms of getting users to use the site you’re building. After all, building a fantastic site that no one uses is a fantastic waste of effort. Rob’s video goes into great depth of explaining why it’s important to go beyond just getting users to “adopt” SharePoint (i.e. forcing them to use the site you’ve built for them), instead getting them to fully “engage” with SharePoint, which means users are making the platform their own and actively using SharePoint as a tool that makes their life better. Rob uses many illustrations and analogies to help drive his points home.

Although the price of the video can seem a bit steep for 2.5 hours, I actually think it’s rather reasonable in price. Watching the video is like watching a recorded class lecture at a university. In that context it wouldn’t be unreasonable at all to pay several hundred dollars for a good lecture. Along those same lines, much of the content Rob covers in his video is much of the same kind of content I spend hours communicating to my own clients. In the long run it could be cheaper to buy the DVD than to pay a consultant like myself to deliver the same content. I think this DVD could be helpful not only for organizations who want to know how to get their users to engage with SharePoint, but is also helpful for consultants who want to learn the basics of SharePoint adoption so they can guide their own clients through the process of creating a great SharePoint site.