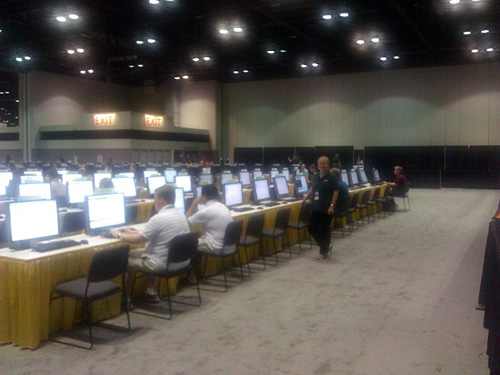 This last week was my first time attending TechEd. I volunteered to be a proctor in the hands on labs area. Unlike the SharePoint conference in Las Vegas, where I remember there being a single room with several hundred computers that was hot as Hades and crowded, the setup in Orlando was quite spacious. The bank of computers you see was just one quarter of the size of the entire lab area. (I’m surprised they didn’t need a backup generator for all the power needed for all those machines!)

HP provided servers that were on-site, that were the physical boxes on which most of the VMs were running. This is a far cry from labs of old, when proctors had to get each and every desktop configured with the same OS, software, labs, and manuals. Virtualization is making this kind of thing worlds easier. You update the VM image once and instantly, everyone’s using a new version.

The big deal at TechEd was that many people got a chance to get hands-on experience with Azure. (This, again, was no small feat on Microsoft’s part, since these labs required real user accounts in real data centers in the Cloud, not on the local servers.) The big announcements at TechEd was that Azure now officially hosts VM images. I myself, as a trainer, am looking forward to seeing how I can use this technology to host training lab machines in the Cloud, so that I can provide user training in any location, without the need of customers setting up huge, beefy machines on-premise.

While I was down in Orlando, I got to spend time with my friend Debbie Farah, an accomplished business woman who is running a successful business that imports jewelry, home furnishings, and other craft items from overseas, in an attempt to better the living standards of women all over the world. She has a store front in Orlando that I enjoyed visiting. She also sells her products on the Home Shopping Network. If you want to shop while making a difference, check out her products.​