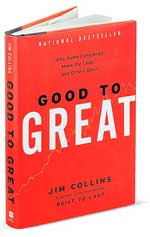 I’ve set aside this year to read some of the classic and popular business books out there. The latest book I read was Jim Collins’ Good to Great: Why Some Companies Make the Leap… and Others Don’t.

I’ve gotten a little cynical with some of the business books out there, because I have the sneaking suspicion that while the book is telling you how to get rich, the author has another strategy altogether for getting rich, which involves you buying his or her book. This book is refreshingly different, in the sense that the underlying premises of the book have been proven out by empirical data and in-person interviews with top executives, rather than some business person coming with some new “system”.

The book outlines a number of publicly traded companies whose stock performance over a decade or more tended to outstrip the stock market by leaps and bounds. (We’re talking 10 times better performance, etc.) In contrast, each company was measured against a comparison company that was in a similar industry and probably could have become great considering the similar circumstances, but unlike the “great” companies, simply floundered and failed. So, the book is an illustration both of what works and what doesn’t.

There are several basic concepts that are outlined in the book:

I must admit, by the end of the book I was feeling a little disconnected from the examples in the book; after all, I’m a small business owner, not the CEO of a fortune 100, publicly traded company. At a certain point the analogies seemed a little out of my reach. Also, the book was written in 2009 and some of the “great” companies highlighted (like Circuit City) are no longer in business. Collins himself points out, though, that just because a company is “great” at one point doesn’t guarantee future success if it stops following the principles that got it there in the first place.

All, it was a great primer based on real companies about what differentiates a company from its competition and allows things to run smoothly and successfully.