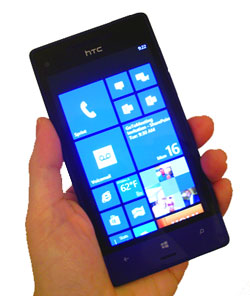 I’ve owned a Windows 6 phone, Windows 7 phone, and now I finally got my hands on a Windows 8 phone from Sprint: the HTC 8XT. (I know, I know, lots of people have already been playing with Windows 8 phones for a while, but Sprint was the last to the dance and just got us Windows 8 phones two months ago.)

The 8XT is a great little gadget. The phone itself is a nice looking blue with a back that’s a bit rubbery; it’s basically like having the phone wrapped in a case, right out of the box. It’s incredibly thin and light, too. I’ve had it for two months and the battery life seems good. It’s got Beats audio and when I occassionally play music out of the speaker, it has pretty good sound.

After my Windows 7 phone bit it, I used an Android phone for a year until Sprint got around to selling Windows 8 phones. I feel like the Windows 8 phone has a lot of simple usability features that make it more functional for everyday taks; the thing that stands out most in my mind is that after you use autocorrect on the Windows phone, you can tell it to automatically add a space after the word. It’s a small thing but saves a ton of time. In my Android phone, the “back” button would only work within a particular application. In my Windows phone, pressing the back button can take me to the previous application I was working with, wihch is especially handy if I wanto go back to that e-mail I was looking at that had information that I want to use in my web browser, etc.

The only thing that this phone doesn’t too well is, unfortunately, be a phone! Although the screen is supposed to go dark when your ear is next to it, it doesn’t always work that well. Why is that a problem? Because the “end call” button is right in the middle of the screen, exactly where my ear belongs if I’m holding the phone to my ear. I’ve disconnected many a person so far, which can be pretty darned embarassing when on business calls. The other thing is that the Sprint voicemaill app doesn’t download voicemails unless you’ve logged into your voicemail, which means you have to check your actual voicemail in order for the voicemail app to tell you if you have any voicemails (which at that point is redundant).  I think this is a Sprint issue more than a phone issue, though.

All in all, I’m happy with my new little friend and I hope it stays intact for another 2 years, until I can trade it in for the next big (or little) thing.